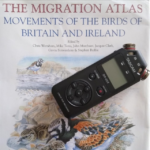 Things have gone very quiet lately with only the expected few localised species recorded on most nights.

Imagine my surprise however when I find a new spectrogram type (2:45 am) this morning! My initial reaction is Blackcap subsong. This is the only short burst recorded and we have had Blackcaps wintering this year in the neighbourhood gardens, so it would appear to be most likely. It does sound quite scratchy rather than flute-like but I have found a few examples on XC which suggest this is quite normal. A bit of a stretch to classify the call as "nocturnal flight call" but worth sharing nonetheless.

Interested in the thoughts of others on the forum.

I picked up Blackcap at night two or three times last spring, at a time when the local wintering birds would have moved on, and assumed that these song strophes were given by birds passing through, and possibly/probably in flight, though, obviously, excluding a bird, for example, landing during the hours of darkness and giving one strophe on alighting is also possible.

I asked Magnus Robb for his opinion on this particular call as I was never quite happy with it being a Blackcap. Indeed, I questioned why it couldn't be a Garden Warbler? The early part of the Spring brought migrants, particularly to the UK so although early, I didn't think it a particularly big stretch as a possibility.

Anyhow, in MR's opinion, he doesn't think it is a Blackcap either. He reckons it's too early for a GW and wasn't completely happy with the subsong/call for that species either. In his opinion, it fits Common Whitethroat better but he's not certain. CW had crossed my own mind at the beginning but again, I thought it might be too early.

Funny thing is, there are no nocmig calls for CW on Xeno-Canto and only 2 for Garden Warbler.

I suppose we'll have to stick with Sylvia sp. for now....

Welcome to Irish Wildlife Sounds! Here you’ll find sound recordings of wild Irish birds, mammals and soundscapes, as well as tips and advice about recording techniques, equipment and identification. We will also keep you up to date on our latest sound-recording projects.