How does this work?

Before commencing, please take a moment to read and familiarise yourself with what this report represents and how it is written:

As this is essentially a pilot study, it is too early to make any substantial conclusions, and, as a result, the report will not follow the layout of a conventional scientific paper, nor will it contain any major statistical analysis, in this early stage. Instead, the general findings will be laid out with a slight, for now hypothetical, conclusion, for certain species, where possible. Species will be presented in an alphabetical order.

This report precedes a proposed five year study which is hoped to commence at Lissagriffin in February 2022. If you see the value in this study please help make this happen with a donation of your choice here.

After a number of exploratory placements between April and late-June, it was decided to deploy an SM4 Mini at Lissagriffin, Mizen Head, Co. Cork – Ireland’s most southwesterly land point. Recording began at sunset on 26th June 2021, and ended at sunrise on 7th November 2021. Recording began at sunset each night, and continued recording between 2 to 4 hours after sunrise, in order to capture any potential early morning migrants such as pipits and wagtails.

Recordings were made with an SM4 Mini (part funded by The Sound Approach) with an extended battery pack, with 6 lithium-ion batteries, and 256GB SanDisk Extreme SD card, which, as mentioned previously, was set to record from dusk to dawn (+2 to 4 hours) daily between June 26th and November 7th.

Every 6 weeks, the SD card and batteries were replaced. Data was uploaded and saved to a personal computer, and sounds were analysed using Audacity (see here for an in depth explanation as to how this process works). Records of calls of a given species were saved in an excel spreadsheet along with number, date, and time. Rather than note the time for every call, calls per species were counted and summed in 30 minute sections. When vocal activity was high, handheld counters were used to count calls. Calls of certain species (curlew, oystercatcher, and gulls) were not counted because of a continued presence through the night, as counting these would have been unrealistically time-consuming for the scope of this pilot study. 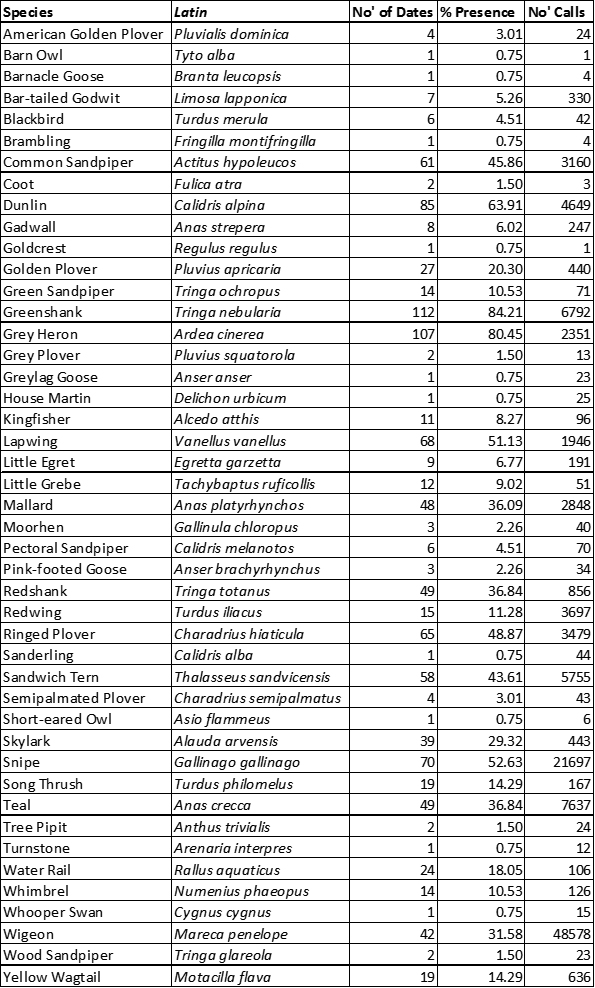 This rare North American vagrant was recorded on four dates (11th, 12th, 14th & 15th October) with a total of 24 calls registered. These records almost certainly refer to an individual discovered at Lissagriffin on 6th October by Brian McCloskey. This bird was last reported on 15th October.

A single individual, presumably a migrant, was recording calling once, at 20:45 on 29th October.

Barnacle goose is a scarce species in Co. Cork with just a scattering of records each year. A single bird was recorded calling four times on 1st November at 6:42. This record ties in with a single bird on site, first noted on 25th October, and last reported on 1st November. Listen below for a single call at approximately 17 seconds, amidst migrating redwing and skylark, just before dawn.

This passage migrant was recorded on seven dates between 13th September and 27th October, with a total of 330 calls registered in total, and a peak of 293 calls on the night of the 20th October.

Although a common resident breeding species, our native populations are bolstered by Scandinavian migrants in autumn, and this occurrence is well-reflected in the phenology trends recorded at Lissagriffin. In total, blackbird was recorded on 6 dates between 12th July and 4th November, with a total of 42 calls recorded. Of these, just one occurred in summer (July 12th) and refers to a single call registered at 4:41 – probably a local bird moving early. The other records all occur between late October and early November (usually with redwing and song thrush, indicating a northern origin) with a peak of 27 calls during the night of November 2nd. The typical nocturnal flight call is the distinctive “srrii” call often given in flight by birds during the day. See and listen below for examples from the project.

Autumn 2021 saw one of the largest eruptions of this northern finch in recent years with numerous birds recorded throughout the country. Whilst no true nocturnal records were logged on the Lissagriffin device, a single bird was recorded calling 3 (nasal calls – the number is higher if you count the less-known “chip” calls) times at 10am on 2nd November. This species has two flight calls – one is akin to the chip – chip calls of chaffinches, the other is a much more nasal wheezing call. Fortunately this bird gave both (listen below).

Common sandpiper is a summer migrant to Ireland and Northern Europe. Whilst the species does breed in Ireland, the majority of birds we see are migrants either on their way north, or returning from the north. From June onwards this species becomes increasingly common along the coastline as failed breeders return south – soon followed by successful breeders and young. Peak passage occurs mid to late July and this is reflected in the data collected from Lissagriffin. A total of 3160 calls were logged across 61 dates between June 20th and October 19th, with a peak of 831 calls on the night of July 18th, with a further 437 calls recorded on 23rd July.

Although this species once bred at Lissagriffin, it is now just an infrequent migrant/winter visitor, as evidenced by the mere two records logged – one at 23:38 on 11th July, with the other on 10th October at 2:57 (audio below).

Dunlin was recorded on 85 dates with 4649 calls logged between June 27th and November 6th, with a notable peak of birds ocurring between August 14th (586 calls) and September 23rd (327 calls).

Gadwall was recorded on 8 dates between October 20th and November 3rd with peaks of 55 calls on October 21st and November 3rd alike. It is clear that the species is a late autumn arrival at Lissagriffin and probably refers to a small wintering population.

Despite being our smallest bird species, goldcrest is a very prominent migrant along the Irish coastline in autumn. This species was recorded once on the 27th October at 2:51am (see first audio below). As this species is not very loud it is difficult to detect using the SM4, so earphones are recommended for the following audio. For reference, a recording of a goldcrest taken by hand during the day is included afterwards.

Golden plover is a a scarce to rare breeding species in Ireland, restricted to a number of sites in the north-west, however, we receive large numbers from the north in the autumn, some of which continue south, with others stopping here for the winter.

A total of 440 calls were registered across 27 dates, with the earliest record occurring on September 13th and the latest on the 6th November (the final study date). A peak of 84 calls occurred on 23d September (presumably referring to a surge of migrants) before numbers levelled out with peaks of 39 calls on 20th October and 34 on 1st November. These second peaks presumably relate to a settled wintering population.

Green sandpiper is a scarce passage migrant and winter visitor in Ireland. In total, 71 calls were recorded across 14 dates, ranging from August 3rd to September 20th, with a peak of 21 calls on the night of September 11th.

Greenshank is one of the most prominent vocalists at Lissagriffin with a total of 6,792 calls logged over 112 dates between June 26th and November 6th, thus the entire study period.

Although the species was present throughout, there appears to be three broad waves, with a peak of 445 calls on 22nd July, 179 calls on 25th August and 192 calls on 21st October. Perhaps these three waves related to migrating juveniles and failed breeders, successful breeders, and finally a settling overwintering population.

Grey heron is a common Irish resident and one of the most prominent species of the study with 2,351 calls logged across 107 dates between 26th June and 6th November (entire study period). Whist the species is present throughout, a spike of 115 calls on both  26th June and 17th July probably relates to post-breeding dispersal with an additional spike of 177 calls on 30th August possibly relating to migrants.

The nocturnal flight call is the same as the daytime flight calls – a harsh, shrieking “khreee” (see first sonogram and audio). There isn’t a lot of variation in this, however they do sometimes give harsh alarm calls, perhaps in response to a predator or due to a dispute with a conspecific (second audio).

Grey (black-bellied) plover is a passage migrant and winter visitor to Ireland and there were just two records, logged on the 9th and 10th of October. Both records occurred not long after dusk, involving 7 and 5 calls, respectively. This points towards the species being a scarce to rare passage migrant at Lissagriffin.

Greylag goose, whilst a genuine winter migrant, is a species with a clouded status in Ireland because of the fact that there are numerous feral populations owing to their popularity in collections and as a food source. However, at Lissagriffin, no such feral population exists, thus a movement of birds (23 calls total) between 2 and 3am on 21st October, almost certainly relates to a group of wild migrants – a theory also supported by the date, which is in line with the migration timing of the species. See both examples below.

Contrary to popular belief, hirundines (swallow, house martin, sand martin, etc.), can and do migrate through the night. A single such record was documented over Lissagriffin when a group of house martins flew over calling (25 calls in total) at 10:43pm.

Birds at night can give either the typical flight call or the alarm call, which was the case on this occasion. See sonogram and first audio below – the second audio is an additional example of the same nocturnal flight call given by a group of house martins, recorded by Xavier Riera in Catalunya.

Kingfisher occurred at Lissagriffin on 11 dates between September 2nd and November 2nd, with a total of 96 calls registered. The first group of records in September probably refers to birds dispersing/migrating with records from late October to November most likely referring to a wintering bird or birds.

Welcome to Irish Wildlife Sounds! Here you’ll find sound recordings of wild Irish birds, mammals and soundscapes, as well as tips and advice about recording techniques, equipment and identification. We will also keep you up to date on our latest sound-recording projects.